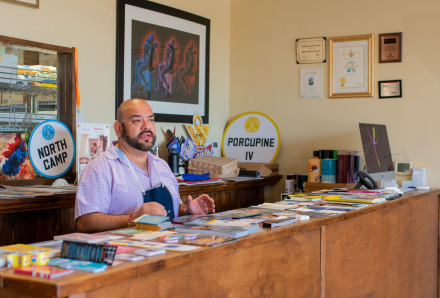 Andy Rosillo, a long-term BusinessSource client who has undergone three loan cycles through the Hollywood BusinessSource Center, said he’s a big fan. “Once I went to a BusinessSource, I never left. Every time that I’ve needed access to capital has been through a BusinessSource center because its seamless, it’s easy and it cuts out a lot of haggle so I can use that time to do other things in my business,” he said. Andy owns Indie Printing, a boutique printing company located in South LA that specializes in same day, next day printing. Indie Printing’s client roster includes major entertainment companies, educational institutions and fashion and tech companies. Andy launched Indie Printing in 2001 from a spare room in his sister’s house, eventually moving the business to a warehouse in Downtown LA. The BusinessSource Centers have helped Andy secure loans that allowed Indie Printing to expand, enabling him to purchase a 10,000 square-foot building in South LA that is now the Indie Printing Headquarters, and to purchase cutting-edge printers and other equipment that has improved his business’ efficiency and ability to provide quality products. “That access to capital allowed us to buy equipment that lowered our costs and allowed us to hire more people,” he said. “It even gave us more efficiency because we could turn around things faster, produce them in house, and do it with our own team of employees, instead of going out to other service providers.” The loan processes with the BusinessSource Centers have gone so smoothly, Andy said he highly recommends their services to other entrepreneurs. Learning about the free resources at the City’s BusinessSource Centers was a refreshing surprise, he said. “I had no idea that the City provided a service or a range of services through these organizations like the ones that they did. It sounded too good to be true because all these services were free,” he said. “So when I tell that to my colleagues and friends, they have a similar reaction.” His first-hand experience helps convince other entrepreneurs that the program works because “It’s coming from someone who has experienced it and it’s got a little bit more weight.” He added that he hopes that more aspiring business owners start turning to the BusinessSource Centers for assistance. “BusinessSources are truly amazing assets that all entrepreneurs should be aware about,” he said. “They have experience; they have seen more than we have, they’re a center of resources.”