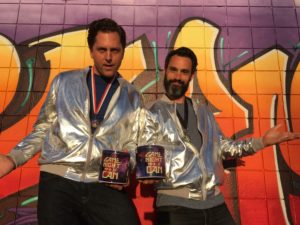 The loan allowed them to develop a board game that became a “Game of the Year” finalist and hire two new employees.

EWDD referred Jason to the Hollywood BSC in May 2018. Jason and Barry were initially seeking a $60,000 working capital loan for inventory back up and developing their second board game, however, after meeting with Jason and analyzing his financials, a Hollywood BSC business coach determined Jason qualified for more capital than he was originally seeking.

The business coach assisted Jason and Barry with developing a revised cost utilizing more capital and created a loan package for $125,000, which was approved in September 2018. Jason and Barry said they were very grateful that they will be able to devote themselves more to their business and they plan to hire two full-time employees with funds from the loan.