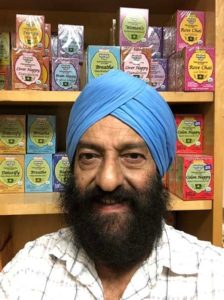 The Hollywood BusinessSource Center has provided ongoing assistance since 2011 to entrepreneur Guru Singh, helping him steadily grow his Herbal Cup Tea business, which is now expected to add six new jobs and reach an estimated $2.5 million in sales by the end of 2018. The BusinessSource program helped Guru launch Herbal Cup Tea, a line of 10 healing and wellness teas sold at Whole Foods, HomeGoods and Marshalls stores throughout the U.S. Because of the company’s ability to access capital, Herbal Cup tea has grown from $185,000 in sales in 2013 to more than $1 million to-date. From 2011 to 2013 Herbal Cup Tea bagged their teas at a competitor’s plant, which limited their growth potential. In 2013, the Hollywood BusinessSource assisted Herbal Cup Tea with an equipment loan to purchase their first bagging machine, leading to a jump in sales from $185,000 to

$315,000. In 2017, the Hollywood BSC assisted the business in obtaining a revolving line of credit and the company reached $680,000 in sales annually. When the business reached capacity with its first bagging machine, Guru reached out to the Hollywood BSC for assistance in purchasing a second machine to grow the company. A BSC consultant prepared a profitability assessment that confirmed Guru’s request met the repayment ability requirement for an equipment loan. A financial package was submitted to a Bank for review. On September 4, 2018, Herbal Cup Tea was approved for an equipment loan. With these funds Guru was able to purchase a second machine with enough bagging capacity to satisfy the growing demand. The loan will allow the business to create six near jobs and reach sales as high as $2.5 million.