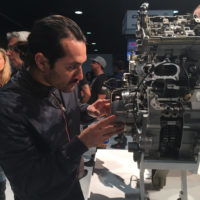 Born in Juarez, Mexico, Rafael left his hometown in 2008 with a truck and $2,000 in his pocket. Within a week, Rafael had a job at a metal fabrication company in Los Angeles. The company specialized in creating pieces for the museum and art industries.

Rafael quickly rose to become the team foreman of 13 employees, where under his leadership he modified the work flow to improve team efficiency. The owner of the company recognized Rafael’s hard work and as a reward, the owner allowed Rafael to use the shop after hours for personal projects. He used this time to experiment and by 2015 Vuro industries was born.

Rafael posted his creations to social media and began to gain a larger audience for his innovative metal work. He began to take on small contracts and was eventually offered a six-figure contract to create pieces featured at the Coachella Music Festival.

Shortly after this contract was completed, Rafael was referred to the Hollywood BSC to help him access the capital he needed to continue to grow his business. Rafael was looking to secure an equipment loan as well as an additional line of credit that would be used to complete new contracts.

In early 2018, a Hollywood BSC consultant recommended that Rafael apply for a new loan program that was a good fit for his business. Rafael agreed and submitted a loan package.

Vuro Industries was approved for the $35,000 small business loan.